State Sen. Trent Garner, R-El Dorado, has offered to repay salary he was improperly paid for work during his short stint as public defender in Union County earlier this year, the head of the state Public Defender Commission said Tuesday.

Commission Executive Director Gregg Parrish told a legislative committee that Garner had reached out to him directly to offer to the repay the funds, which Parrish said in an interview totaled about $7,327.

Garner was forced to resign his position in June as a public defender due to a state law that prohibits elected constitutional officers, including legislators, from also working for state agencies. The fallout began with an article by attorney Matt Campbell on his blog, the Blue Hog Report.

Parrish said he spoke with officials from the state Office of Personnel Management to determine the best way for Garner to repay the state, but he told lawmakers Tuesday morning that he needed to reach back out to Garner. 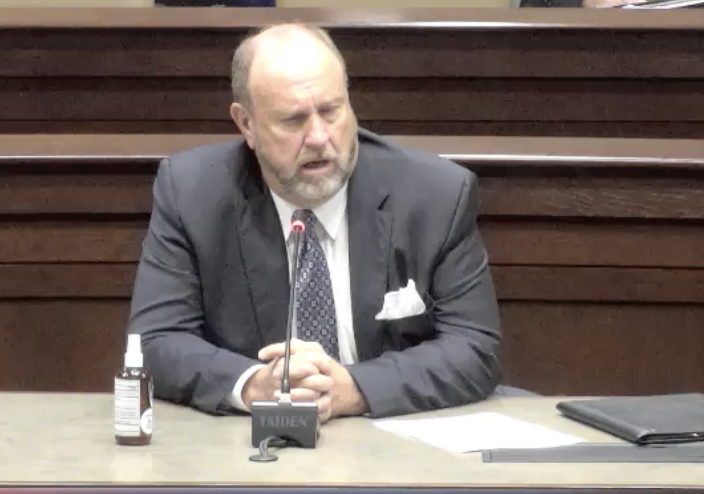 Reached by phone Tuesday afternoon, Garner said he had no comment on the matter.

Parrish said the process for repayment was still being finalized, and he didn’t have a firm timeline for when the funds would be repaid.

Parrish’s comments at the Performance Evaluation and Expenditure Review Subcommittee of the Arkansas Legislative Council came in response to a question from Sen. Keith Ingram, D-West Memphis, who asked about Garner’s situation and questioned why he was ever hired.

“How that happened, I scratch my head,” Ingram said.

Several past sitting legislators have worked for state agencies, including the Public Defender Commission. However, the law was amended in 2017.

According to online state payroll records, Garner was to be paid an annual salary of $59,999 for his work as a public defender in addition to the base state Senate salary of $44,356. Legislators are also paid a per diem and reimbursed for mileage for attending legislative meetings.

*This story has been updated.

Hunter Field is a veteran Arkansas journalist whose reporting on the state has carried him from military air strips in northwest Arkansas to soybean fields in the Arkansas delta. He spent the better part of the last decade investigating and reporting on Arkansas government and politics. For three years, he covered education policy, medical marijuana and the Arkansas General Assembly as part of the Arkansas Democrat-Gazette’s Capitol Bureau. Most recently, he was the Democrat-Gazette's projects editor, leading the newspaper's investigative team. Hunter got his start in journalism covering sports for The Commercial Appeal in Memphis. A Memphis native, he enjoys smoking barbecue, kayaking and fishing in his free time.