The U.S. Senate unanimously voted Thursday, Dec. 15, 2022, to ban TikTok from federal phones over concerns about security threats from China. The bill became law after senators attached it to a massive omnibus bill for funding the government in December of last year. (Photo by Kevin Frayer/Getty Images)

Arkansas recently became the latest of a growing number of states to ban the use of the popular social media app TikTok on state devices and networks due to fears of data misuse by the Chinese government.

In last week’s memo, Askins said the only exceptions to the policy would be for authorized law enforcement or security purposes.

“On December 2, 2022, FBI Director Christopher Wray warned citizens about usage of TikTok,” Askins wrote. “TikTok’s privacy and data collection policies allow for the capture  of sensitive, personally identifiable information and that data is stored in locations that could be accessed by the Government of the People’s Republic of China for use other than permissions given by the user.” 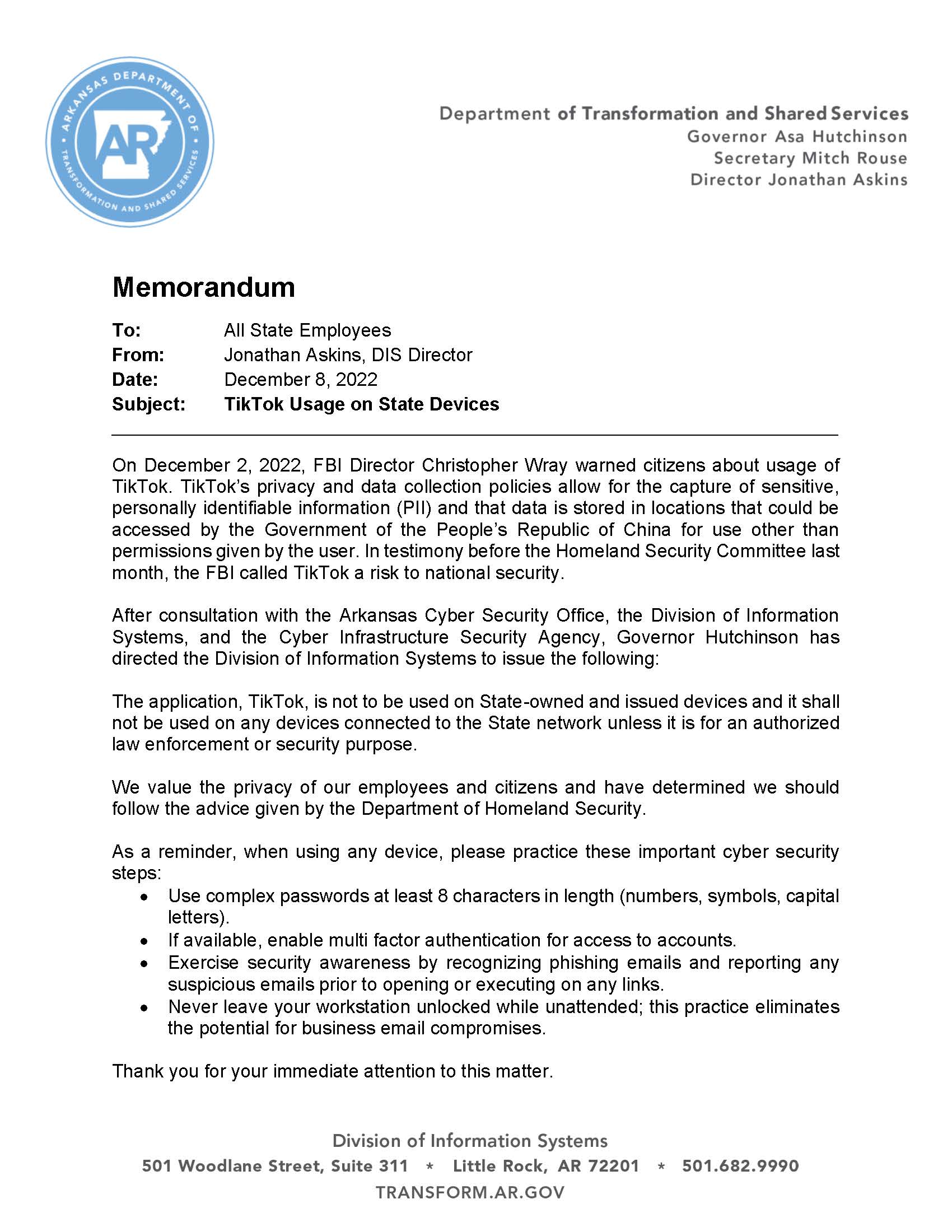 TikTok is a social media platform used mostly for short entertainment videos. The clips range from pranks, satire and dancing to instructional content and “life hacks.”

The U.S. Senate on Wednesday unanimously passed a bill banning federal employees from downloading TikTok on their work phones. It will be up to the U.S. House whether to send the bill to President Joe Biden to be signed into law.

Arkansas joins more than a half-dozen states that have announced action against TikTok in recent weeks. Florida and Nebraska were the first state’s to ban the app on state devices in 2020.

Askins’ memo came three days after Arkansas Sen. Gary Stubblefield (R-Branch) pre-filed a bill for the 2023 session that would prohibit state employees and contractors from using the controversial app on state devices.

Hunter Field is a veteran Arkansas journalist whose reporting on the state has carried him from military air strips in northwest Arkansas to soybean fields in the Arkansas delta. He spent the better part of the last decade investigating and reporting on Arkansas government and politics. For three years, he covered education policy, medical marijuana and the Arkansas General Assembly as part of the Arkansas Democrat-Gazette’s Capitol Bureau. Most recently, he was the Democrat-Gazette's projects editor, leading the newspaper's investigative team. Hunter got his start in journalism covering sports for The Commercial Appeal in Memphis. A Memphis native, he enjoys smoking barbecue, kayaking and fishing in his free time.